New emerging symbioses involving the dominant animal of tropical reefs: the corals. All our activities are aimed at understanding the dynamics that will drive this ecosystem under a climate change scenario, in order to develop and propose environmental management plans.

Mutualistic, commensalistic and parasitic associations are extremely abundant in coral reef ecosystems. This abundance is mainly due to the topographic complexity created by many benthic organisms, such as reef-building corals, that offer a plethora of habitats to support an extraordinary diversity of organisms from all kingdoms of life. Therefore, scleractinian corals are usually considered the most prone to provide numerous different habitats and to bear a huge number of symbiotic relationships. However, many other invertebrate groups such as sponges, bryozoans as well as other cnidarians are known to establish strict symbiotic relationships with other marine organisms, even though their inter-specific interactions are poorly investigated. In particular, hydroids can establish symbiotic relationships with most of marine organisms such as echinoderms, sponges, bryozoans, algae, tunicates and vertebrates. Moreover, hydroids can live in association with other cnidarians. In this context, recently several hydrozoans species are found form strict associations with hard and soft corals as well as sponges and bryozoans in Maldives. Although a mutualistic relationships between them have been proposed, a link between the occurrence of hydrozoan polyps and some unhealthy conditions such as coral bleaching and coral diseases are already hypothesized, suggesting a parasitic relationship between them.

Unfortunately, even these symbioses resulted most common than previous known, information regarding the nature, the origin, as well as any correlation with environmental factors are far to be elucidated. For this reason, this project is aimed to explore the influence of hydroids presence on the health of benthic organisms. Especially this project is focusing on the effects/roles of hydrozoans on the survivorship of corals, sponges and bryozoans of the Archipelago of Maldives throughout field activities and laboratory experiments in relation to different potential threats as diseases, coral bleaching and predatory activity of the gasteropods Drupella sp.

To date, symbiotic associations have been mainly studied by considering pairwise relationships. However, one host is typically inhabited by several other organisms (e.g. epibionts, commensals and parasites) that may interact with each other and with the two partners. Thus, we believe that is necessary to understand how these co-occurring organisms influence the symbiotic association considered and how their combined effects influence the two partners. This information could be used to predict the ability of single organisms to persist in a rapidly changing environment. Indeed, habitat degradation could have serious negative effects on reefs diversity and may disrupt these symbiotic relationships, exacerbating the loss of biodiversity. For this reasons, in order to preserve reefs biodiversity we believe that in-depth studies addressed to identify and describe these symbioses and assess their vulnerability will be increasingly necessary in the future. 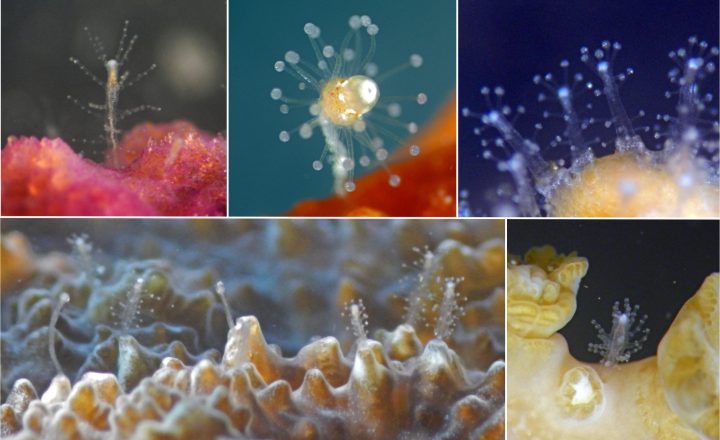